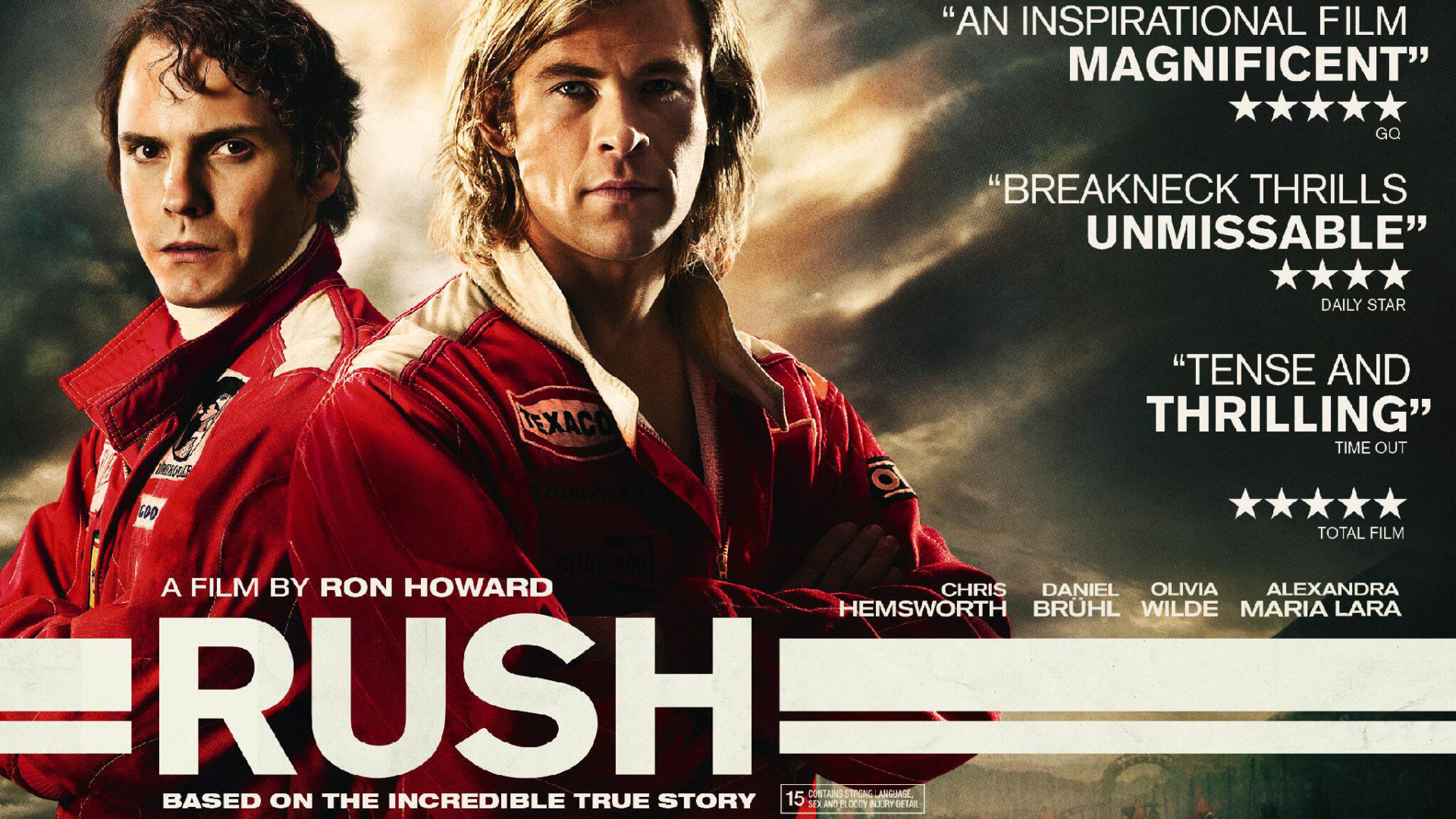 I’ve written quite a few posts about my father and motorsports on this site. My last post on him was about his time in F1, more specifically, the 1970’s when he was beginning his career and first experienced a World Championship in 1976 with James Hunt. I hope you get a sense of the pride and admiration I feel for him.

As the Internet is apt to do, it creates opportunities and connections only possible through fiber, code, an alternate reality and a send button. Out of the blue, I found myself being invited to a screening of Rush.

Aren’t these connections wonderful? I found myself drooling onto the keyboard.

Unfortunately, I couldn’t make the Indy screenings, so the Social Agency in charge of the movie promotion arranged for me to see it in San Francisco while I was there – seating me in the press section – for little ol’ me? Thank you Universal.

Before I talk about the film, let’s state the obvious. I’m biased. But in my defense, I’m somewhat educated, have a decent aesthetic, practice critical thinking, and possess a little wit. Here are my biasedly honest thoughts on the film.

Simply put, Rush is the best Hollywood movie ever about racing and motorsports.

What about Cannonball Run, you ask? Please stop reading now.

But in all honesty, it’s a superb film – acting, vintage cars, the sounds of 1970’s engines, believable CGI, and a well written script all combine to create a really good film. Not a good racing or motorsports film, a really good film.

What makes this movie so good?

Acting: Racing films typically fall short in this area, but Chris Hemsworth as James Hunt and Daniel Bruhl as Niki Lauda are exceptional. In fact, Bruhl deserves some serious attention with awards season around the corner (no pun intended). Pierfrancesco Favino as Clay Regazzoni plays his role well and Olivia Wilde as the short lived Mrs. Hunt is just right. And Marlene Lauda played by Alexandra Maria Lara is perfect –she seems like such a loving wife.

The cars and the sounds: I’ve looked to see if there are any inconsistencies in how the cars and sounds are portrayed, but I haven’t found any. Remember the movie Driven? There are no Indy Cars racing alongside Formula Fords in Rush. F1 cars in the 70’s are so easy on the eye – they’re fascinating, studies in the fast changing times of aerodynamics, technical innovation, suspension, and safety (or lack thereof). And the sounds…yes please. It immediately brought you into the racing environment.

I’ve heard mixed reviews on the CGI for this film, but I really appreciated the approach to giving the movie a vintage look for on-track action. I felt an immediate awareness for how much driving talent was required for these cars and how on-the-edge these drivers were at all times. Lauda’s proclamation during the film that 20% of F1 drivers died each season is a little off, but it communicated how dangerous this era was (read/watch the work Sir Jackie Stewart did on driver safety during his career). The CGI showed how incredibly talented Hunt and Lauda were and that driving these cars was always a fine line between victory and danger. The angles, lens flares, editing style all worked for me.

And it’s a good story. It always baffles me when Hollywood skimps on writing. I’m glad they didn’t for Rush. I found myself constantly flipping my empathy between Hunt and Lauda throughout the film. The writing created an interesting dichotomy between the two characters – a necessary ying and yang that only the 1976 Formula One Championship could have provided.

The fact is, only real life could have scripted the F1 1976 season. Homer, Shakespeare and Dickens combined would have fallen short.

My favorite scene is the film is between Lauda and his wife. Happiness is the enemy he said. It made me think about the sacrifices that are made to be exceptional at something. He talked about this with his wife,  gazing out the window as he understood his vulnerability. A flame was present throughout this scene. Talk about foreshadowing.

It’s an exciting and award winning film. I expect Daniel Bruhl and the audio and visual effects to receive nominations, not to mention a film composition by Hans Zimmer. HANS ZIMMER!

I won’t say more. I want you to experience the story without my recap, without my blow-by-blow – to simply enjoy the movie. It was a really special night for me. I was able to think back on my dad’s career, but also the 70’s era of F1 and the legends of both Hunt and Lauda. I sat by myself, in a reserved seat, with a proud smile on my face. Thank you.

My only wish is that I could have seen this with my Dad. I’m sure it would have revealed a few more stories about that season and James hunt.

And finally, if you haven’t seen the BBC documentary Hunt vs. Lauda: F1’s Greatest Racing Rivals, find it!