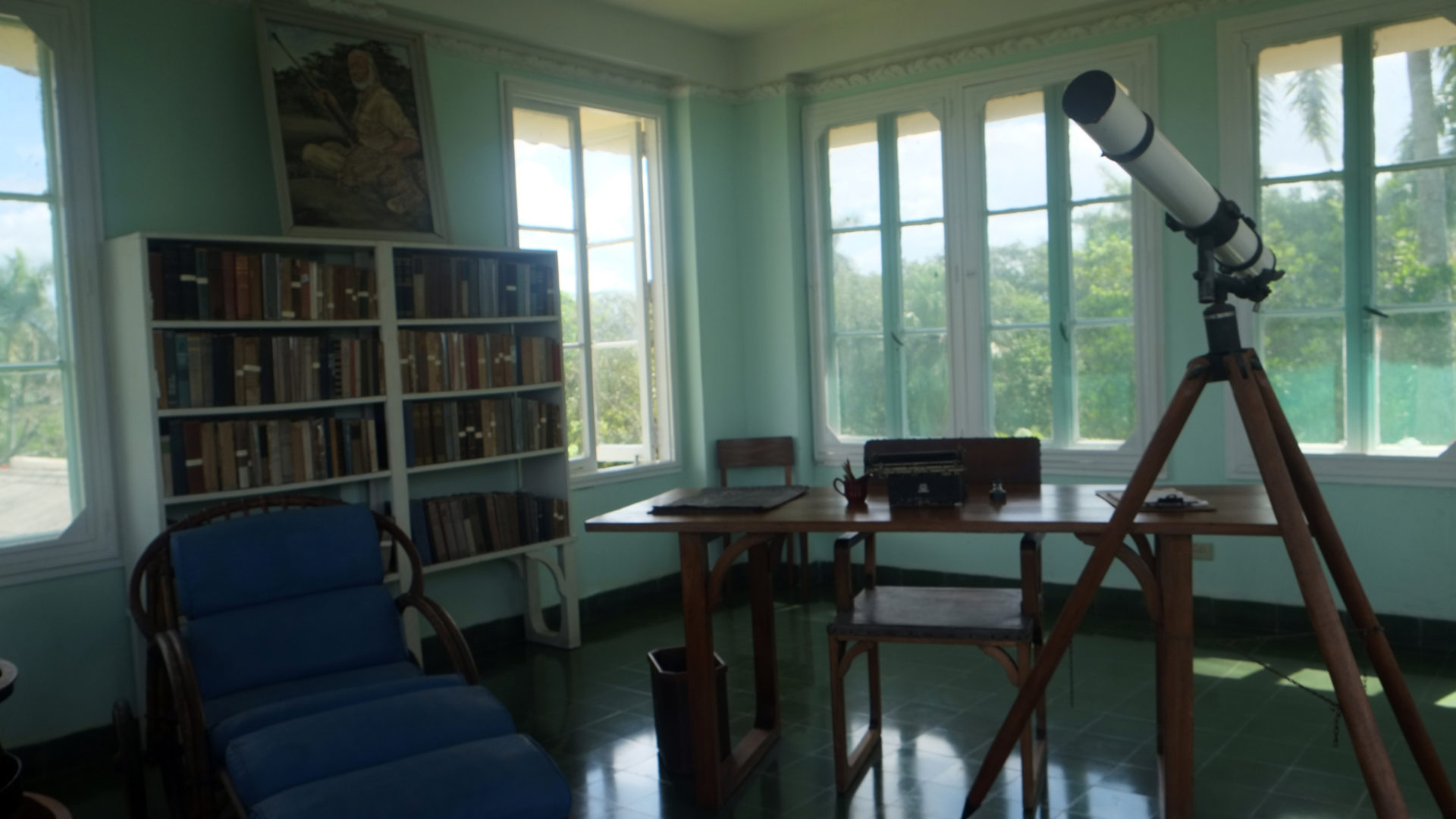 Cuba always ranks very high on my list. The Island is stunning. The culture is intricate. The cigars are worth it. The imagery is unforgettable. And the lodging can be….worthy of a blog post.

Why did I go? To make a long story short, it was in support of an exhibition at the Indianapolis Museum of Art. I shot video, conducted interviews, attended a Rumba, and met lots of people. Some video below from ArtBabble.

But enough about that. How was Cuba? Here goes.

I fully prepared for this trip. I researched the country, this history, the politics, the you-name-it. I read about Ernest Hemingway in Cuba and determined I would follow some of his footsteps in Havana. I even brought Old Man and the Sea with me.

But of course I was not prepared.

I arrived in Havana in the early hours of the morning. I went through customs (where they did not stamp my passport). We then took a van into the city and our shared housing. I was staying with 2 other colleagues in someone’s household that had rooms for rent. I was dehydrated, tired, and in that state of mind that comes from being in a foreign environment. I was happy to be led to my room, with a door, with some privacy. The room was tiny, but it had a bed. I hit the bed within seconds. Then something hit me: the smell of cat urine.

Remarkably, I slept a few hours that night. Fortunately, there was a rooster right outside of my window that made sure I woke up. It’s hard for me to talk about sleeping, engulfed by the smell of cat urine. It’s horrible. And that smell never goes away. When I got out of my very own litter box, I was eager for a shower and a new room. I accomplished one of those things.

I spoke to my landlord about other rooms. Andreas didn’t like me from the start. He could not comprehend that I was a married man without kids. He informed me that all of the other rooms were occupied. This included my immediate neighbor who walked around all night. He was visiting from Trinidad and Tobago and was here for his daughter’s thyroid operation. Andreas called her “the fat one.” Joining my T&T neighbor in walking the corridors at night was Andreas’ little dog Honey. Honey’s paw nails were painted bright pink. And I was being judged for not being a father.

I shared a bathroom with others in the house, but I didn’t really care. It had a shower. After processing the previous night – sheets, pillows and a mattress marinated in cat piss, this guy walking around, the dog, rooster and Andreas, all I wanted to do was wash it all away. I guess I did, with freezing water. The water for the shower was heated by an exposed electrical wire. Water comes out of the shower head, hits this wire and then hits me. I had never seen anything like this. And apparently it wasn’t working. Day 1 – it had to get better. I put in a long day of work in Havana and was ready for a good night’s sleep.

Since there were no other rooms available, I braced myself for night 2. I had more time to assess my surroundings and prep my room. I simply accepted the smell of cat urine. I had my AC unit blasting and my bedside light was glowing. I got started on Old Man and the Sea. I was exhausted, but falling asleep to a good book is pretty close to heaven. I fell asleep. And then I awoke. Power outage.

I learned during my time in Havana that power comes and goes. It’s a way of life. The interruption in power stopped the AC unit. The air became stagnant, and the stench of cat urine permeated my hair and skin. I could taste it. Random people walked around the house. Honey barked and barked. The rooster was rustling. I laid in bed, my eyes wide open trying to find the humor in all of it. I was sweating. It was pitch black. I smelled horribly. And a dog with painted toe nails was barking.  Yeah, it was kind of funny.

So the next day started the same way – cold shower, except this time I had to shave. And by shave, I really mean carve into my skin and bleed profusely. But there was good news. My T&T friend was checking out. His room was available. I sweet talked Andreas – who still looked at me with disdain. I had no offspring. BUT – he gave me the keys to the palace – a new room.

The new room was absolutely incredible (meaning, urine free). It was clean, spacious, had a balcony and a private bathroom. I wanted to hug Andreas, but knew that would be a grave mistake. Two nights in the litter box had resulted in a near miracle. I had earned this.

The next few nights were fantastic. I would sit on the balcony drinking rum, smoking a cigar and reading my book. The breeze was relaxing. The sounds of the streets were energetic. I appreciated every single minute of it. Honey would come to visit. It allowed me to fully process the beauty of Havana. I felt so lucky to be there.

I finished Old Man and the Sea on my last night. I stayed up until 3am in my room reading. I thought of Hemingway, Havana, life, being a man, and all that stuff. I felt a little like Santiago. I still felt lucky. I dozed off and woke up a couple of hours later – I had an Air Cubana flight to catch. I hopped in the shower.

I came out of the bathroom at around 5am in my boxers. Andreas was standing there. Also in his underwear. Just his underwear. He stared at me. I stared back. He had a scar running from collar bone down to the bottom of his gut. His gut was round. He didn’t say anything. Neither did I. I got dressed. I packed. I organized. And Andreas watched. Honey popped in and out of the room. She wasn’t barking. They never made a peep.

You know what? It wasn’t weird. After a week of being Havana (and I realize I’ve not mentioned about all of the adventures I had in the city), working long hours, sleeping in such interesting conditions and so on, it was going to take a lot to fluster me. An older Cuban man standing in underwear with a massive scar at 5am is nothing.

This was a portion of my Havana experience 5 years ago. I would go back tomorrow if I could. I would go back and re-read Old Man and the Sea, smoke some cigars, explore the city and of course, visit Andreas.

I’m a father now. He and I would have lots to discuss, in our underwear of course.